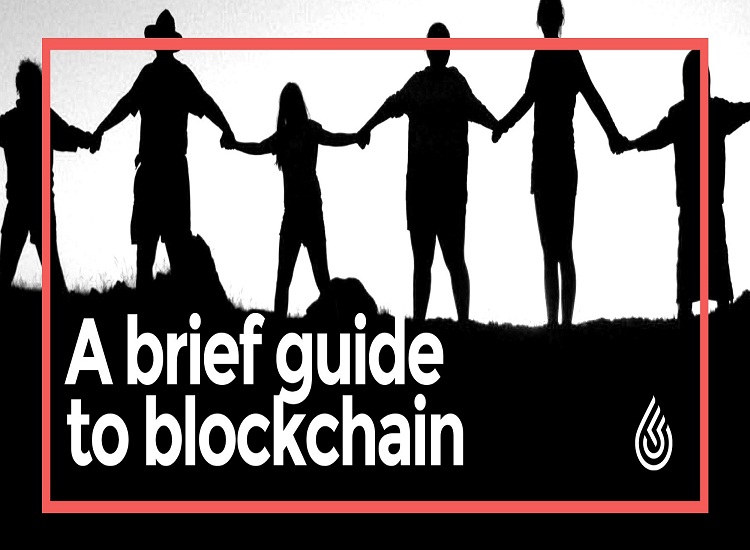 A Brief Introduction To Blockchain | For Normal People

If you’ve attempted to dive into this mysterious thing called blockchain, you’d be forgiven for recoiling in horror at the sheer opaqueness of the technical jargon that is often used to frame it. So before we get into what a cryptocurrency is and how blockchain technology might change the world, let’s discuss what blockchain actually is.

In the simplest terms, a blockchain is a digital ledger of transactions, not unlike the ledgers we have been using for hundreds of years to record sales and purchases.

The function of this digital ledger is, in fact, pretty much identical to a traditional ledger in that it records debits and credits between people. That is the core concept behind blockchain; the difference is who holds the ledger and who verifies the transactions.

With traditional transactions, a payment from one person to another involves some kind of intermediary to facilitate the transaction. Let’s say Rob wants to transfer £20 to Melanie. He can either give her cash in the form of a £20 note, or he can use some kind of banking app to transfer the money directly to her bank account.

In both cases, a bank is an intermediary verifying the transaction: Rob’s funds are verified when he takes the money out of a cash machine, or they are verified by the app when he makes the digital transfer. The bank decides if the transaction should go ahead.

The bank also holds the record of all transactions made by Rob and is solely responsible for updating it whenever Rob pays someone or receives money into his account. In other words, the bank holds and controls the ledger, and everything flows through the bank.

That’s a lot of responsibility, so it’s important that Rob feels he can trust his bank otherwise he would not risk his money with them. He needs to feel confident that the bank will not defraud him, will not lose his money, will not be robbed, and will not disappear overnight. This need for trust has underpinned pretty much every major behaviour and facet of the monolithic finance industry, to the extent that even when it was discovered that banks were being irresponsible with our money during the financial crisis of 2008, the government (another intermediary) chose to bail them out rather than risk destroying the final fragments of trust by letting them collapse.

Blockchains operate differently in one key respect: they are entirely decentralized. There is no central clearing house like a bank, and there is no central ledger held by one entity. Instead, the ledger is distributed across a vast network of computers, called nodes, each of which holds a copy of the entire ledger on their respective hard drives. These nodes are connected to one another via a piece of software called a peer-to-peer (P2P) client, which synchronizes data across the network of nodes and makes sure that everybody has the same version of the ledger at any given point in time.

When a new transaction is entered into a blockchain, it is first encrypted using state-of-the-art cryptographic technology. Once encrypted, the transaction is converted into something called a block, which is basically the term used for an encrypted group of new transactions. That block is then sent (or broadcast) into the network of computer nodes, where it is verified by the nodes and, once verified, passed on through the network so that the block can be added to the end of the ledger on everybody’s computer, under the list of all previous blocks. This is called the chain, hence the tech is referred to as a blockchain.

Once approved and recorded into the ledger, the transaction can be completed. This is how cryptocurrencies like Bitcoin work.

Accountability and the removal of trust

What are the advantages of this system over a banking or central clearing system? Why would Rob use Bitcoin instead of normal currency?

The answer is trust. As mentioned before, with the banking system it is critical that Rob trusts his bank to protect his money and handle it properly. To ensure this happens, enormous regulatory systems exist to verify the actions of the banks and ensure they are fit for purpose.

Governments then regulate the regulators, creating a sort of tiered system of checks whose sole purpose is to help prevent mistakes and bad behavior. In other words, organizations like the Financial Services Authority exist precisely because banks can’t be trusted on their own.

And banks frequently make mistakes and misbehave, as we have seen too many times. When you have a single source of authority, power tends to get abused or misused. The trust relationship between people and banks is awkward and precarious: we don’t really trust them but we don’t feel there is much alternative.

Blockchain systems, on the other hand, don’t need you to trust them at all. All transactions (or blocks) in a blockchain are verified by the nodes in the network before being added to the ledger, which means there is no single point of failure and no single approval channel.

If a hacker wanted to successfully tamper with the ledger on a blockchain, they would have to simultaneously hack millions of computers, which is almost impossible. A hacker would also be pretty much unable to bring a blockchain network down, as, again, they would need to be able to shut down every single computer in a network of computers distributed around the world.

The encryption process itself is also a key factor. Blockchains like the Bitcoin one use deliberately difficult processes for their verification procedure. In the case of Bitcoin, blocks are verified by nodes performing a deliberate processor- and time-intensive series of calculations, often in the form of puzzles or complex mathematical problems, which mean that verification is neither instant nor accessible.

Nodes that do commit the resource to verification of blocks are rewarded with a transaction fee and a bounty of newly-minted Bitcoins. This has the function of both incentivizing people to become nodes (because processing blocks like this require pretty powerful computers and a lot of electricity), whilst also handling the process of generating – or minting – units of the currency.

This is referred to as mining because it involves a considerable amount of effort (by a computer, in this case) to produce a new commodity. It also means that transactions are verified by the most independent way possible, more independent than a government-regulated organization like the FSA.

This decentralized, democratic and highly secure nature of blockchains means that they can function without the need for regulation (they are self-regulating), government or other opaque intermediaries. They work because people don’t trust each other, rather than in spite of.

Let the significance of that sink in for a while and the excitement around blockchain starts to make sense.

Where things get really interesting is the applications of blockchain beyond cryptocurrencies like Bitcoin. Given that one of the underlying principles of the blockchain system is the secure, independent verification of a transaction, it’s easy to imagine other ways in which this type of process can be valuable. Unsurprisingly, many such applications are already in use or development. Some of the best ones are:

Smart contracts (Ethereum): probably the most exciting blockchain development after Bitcoin, smart contracts are blocks that contain code that must be executed in order for the contract to be fulfilled. The code can be anything, as long as a computer can execute it, but in simple terms, it means that you can use blockchain technology (with its independent verification, trustless architecture and security) to create a kind of escrow system for any kind of transaction.

As an example, if you’re a web designer you could create a contract that verifies if a new client’s website is launched or not, and then automatically release the funds to you once it is. No more chasing or invoicing. Smart contracts are also being used to prove ownership of an asset such as property or art. The potential for reducing fraud with this approach is enormous.

Cloud storage (Storj): cloud computing has revolutionized the web and brought about the advent of Big Data which has, in turn, kick-started the new AI revolution. But most cloud-based systems are run on servers stored in single-location server farms, owned by a single entity (Amazon, Rackspace, Google etc). This presents all the same problems as the banking system, in that your data is controlled by a single, opaque organization which represents a single point of failure. Distributing data on a blockchain removes the trust issue entirely and also promises to increase reliability as it is so much harder to take a blockchain network down.

Digital identification (ShoCard): two of the biggest issues of our time are identified theft and data protection. With vast centralized services such as Facebook holding so much data about us, and efforts by various developed-world governments to store digital information about their citizens in a central database, the potential for abuse of our personal data is terrifying. Blockchain technology offers a potential solution to this by wrapping your key data up into an encrypted block that can be verified by the blockchain network whenever you need to prove your identity. The applications of this range from the obvious replacement of passports and I.D. cards to other areas such as replacing passwords. It could be huge.

Digital voting: highly topical in the wake of the investigation into Russia’s influence on the recent U.S. election, digital voting has long been suspected of being both unreliable and highly vulnerable to tampering. Blockchain technology offers a way of verifying that a voter’s vote was successfully sent while retaining their anonymity. It promises not only to reduce fraud in elections but also to increase general voter turnout as people will be able to vote on their mobile phones.

What You Don’t Know About Term Insurance Plans, but Should

Term Insurance and Its Significance

What Is Blockchain Development?