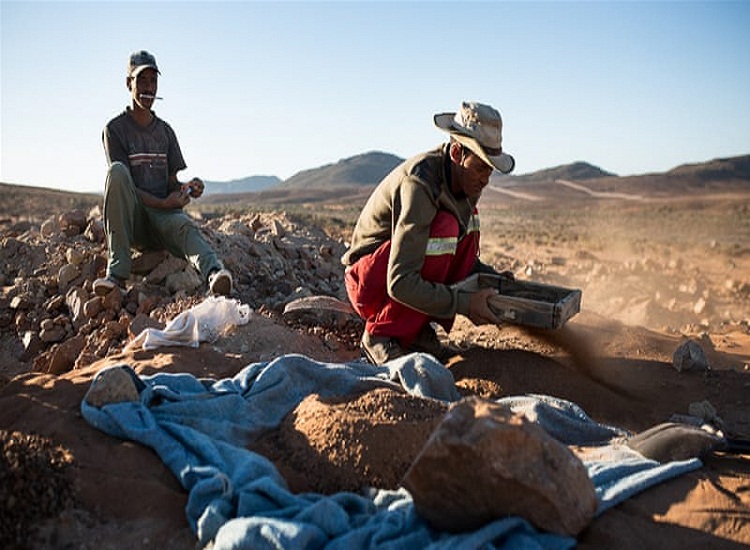 History of the Kimberley Diamond Fields

South Africa’s first diamond was found in 1866 in the Northern Province, along with the Orange River banks. Following the discovery of the diamond, there was an extensive diamond rush, with thousands of hopeful prospectors flooding the area in search of alluvial diamonds along the river’s banks as well as by the banks of the nearby Vaal River.

Within a few years, several large diamonds were found, among them one located on a farm called Jagersfontein, which later became a famous diamond mine. After a number of discoveries, the area became known as Beaconsfield, which is today a suburb of Kimberley. One year after the discovery of the Jagersfontein diamond, the Kimberley and De Beers pipes were discovered nearby Bultfontein, and similar discoveries were made at farms such as Benaauwheidsfontein, Dorstfontein, and Vooruitzicht. A fifth was found 20 years later, known as the Wesselton pipe.

While the pipes were initially worked by individuals, as the depth of the digging increased a more effective solution became necessary. In 1888 the De Beers Consolidated Mines came into being, under the ownership of Cecil John Rhodes, a combination of the Kimberley and De Beers Mines.

In 1897, the rights to dig the Kimberley Mines were bought by a new company – Kimberley Mining Limited (KML). They mined until 1914, using a method known as opencast pit mining. This continued until World War I, in 1914. After the war ended in 1918, the mine was simply maintained for the next 8 years. At that point De Beers Consolidated took charge, but other than a few samplings of the mine’s contents, once in the 1950s and again in the 1980s, the mine has lain dormant. In 2002, the New Diamond Corporation (NDC) took control, but without funding the dumps and the mine became available. Today the Meepo Investment Consortium, part of the New African mining operations, has the rights to both the Caravan Park Dumps and the Kamfersdam Dumps of the Kimberley mines.

Kimberley itself was established in 1871 following the diamond discoveries, and the town’s growth was large as a result of the various mines built in the surrounding area. The town is named after kimberlite rocks – geologic volcanic rock formations that occur in vertical pipes, and which contain diamonds.

Over time, the formations erode and the diamonds are carried downstream by rivers and streams to collect in alluvial diamond deposits. Not all kimberlites contain diamonds, and of those found not all are of sufficient quality or quantity to attract interest. However, the alluvial diamonds found are usually of higher quality than those found inside the kimberlite pipes – because by the time the alluvial diamonds are discovered in their riverbed locations, low-quality stones have been destroyed by the river’s current and only high-quality stones remain.

One of the world’s premier areas for diamond mining, the Kimberley area is known today globally by members of the industry. It is nearly 500 km from Johannesburg and nearly 1,000 km from Cape Town.

Today, in the area surrounding Kimberley there are a number of abandoned mine dumps that may have economic potential. Three of those dumps are: The Caravan Park dumps, the Kamfersdam dumps and the Eddie Williams Oval dumps.

The Kimberley Municipality owns the mining rights to these areas, which they hope to turn one day into low-cost housing. Diamond Recovery can be carried out at the plant which is secured and has both water and electricity. There is a perfect area for disposing of tailings. Kimberley’s infrastructure means it can be easily reached by airplane, railway or other means of public transport, a great boon to mining the area.

While surveying has been done of late, it is not easy to judge the reliability of the resultant report. Primarily, both tailings and waste material have been lumped together, making the grades somewhat unreliable and although samples were taken from certain areas, the grades in other areas not tested could be vastly different.

Today’s successful diamond recoveries from the Kimberley tailing dumps could be indicative of poor techniques used initially in the diamond recovery plants of the previous century. Another possible explanation is that previously the material was ground too coarsely and the smaller stones were not released or that the poorer graded material was dumped along with the tailings. As an experienced investor in New Africa Mining, I would say that this material’s diamonds, through the processes of weathering, have been released and are turning up in great quantities, also increasing the number of diamonds were recovered.

West of the Kimberly Mine Museum, these dumps hold material originally mined from the Kimberley mine – one of the biggest mines that existed as the 19th century drew to a close – from 1871 until 1914. The diggers mined to an ultimate depth of 1,097 meters.

The caravan park sits on top of material that is between 1 and 2 meters thick, and as it contains some 595,000 tons of tailings, graded 9 cpht, there are approximately 53,550 carats worth of total diamonds located in the grounds here, with the largest diamond recovered from this dump so far weighing in at nearly 23 carats. In 2005, the dumps were mined for a total of 187 days and 1,122 hours. A total of 74,800 tons were mined and 4,874.28 carats were recovered at an average grade of 6.7 cpht.

Estimates are that some 42% of the original dump material exists, which means that there is extraordinary potential for mining and a great return on the investment it will require to bring these mines to a fully active working state.

The historically head grade of Kamfersdam was 28 carats per 100 tons (cpht). The two tailings of this dump total 5.2 meters or 5.4 million tons of tailings, which means there are an inferred.63 million total carats at 12 cpht. If 1 million tons are mined here per year, there should be another 4 – 6 years in which to make use of this resource. Despite the 12 cpht inferred, it is actually quite difficult to ascertain the grade of the material located in this dump, though it can be used for now.

It will be important to discover the actual grade, as well as the average value per diamond carat – especially if it is to be compared with the diamonds found in the Caravan Park dumps so that a true estimate of its economic value can be ascertained. Over the next 4-6 years,mining these dumps should be an extremely lucrative venture, well worth the investment and a reliable source of income and investment return.